Cotton’s comeback – the rest of the story

Oh, what a road it has been.

As some of you may remember, Cottonpickinwabbit got a little punch drunk after his return from NC State in February and tried (unsuccessfully) to jump the paddock fence. I attribute that moment of juvenile delinquency to the fact that he had just spent 4 days confined in a stall with a paralyzed esophagus; can’t blame the guy for feeling a tad spunky. 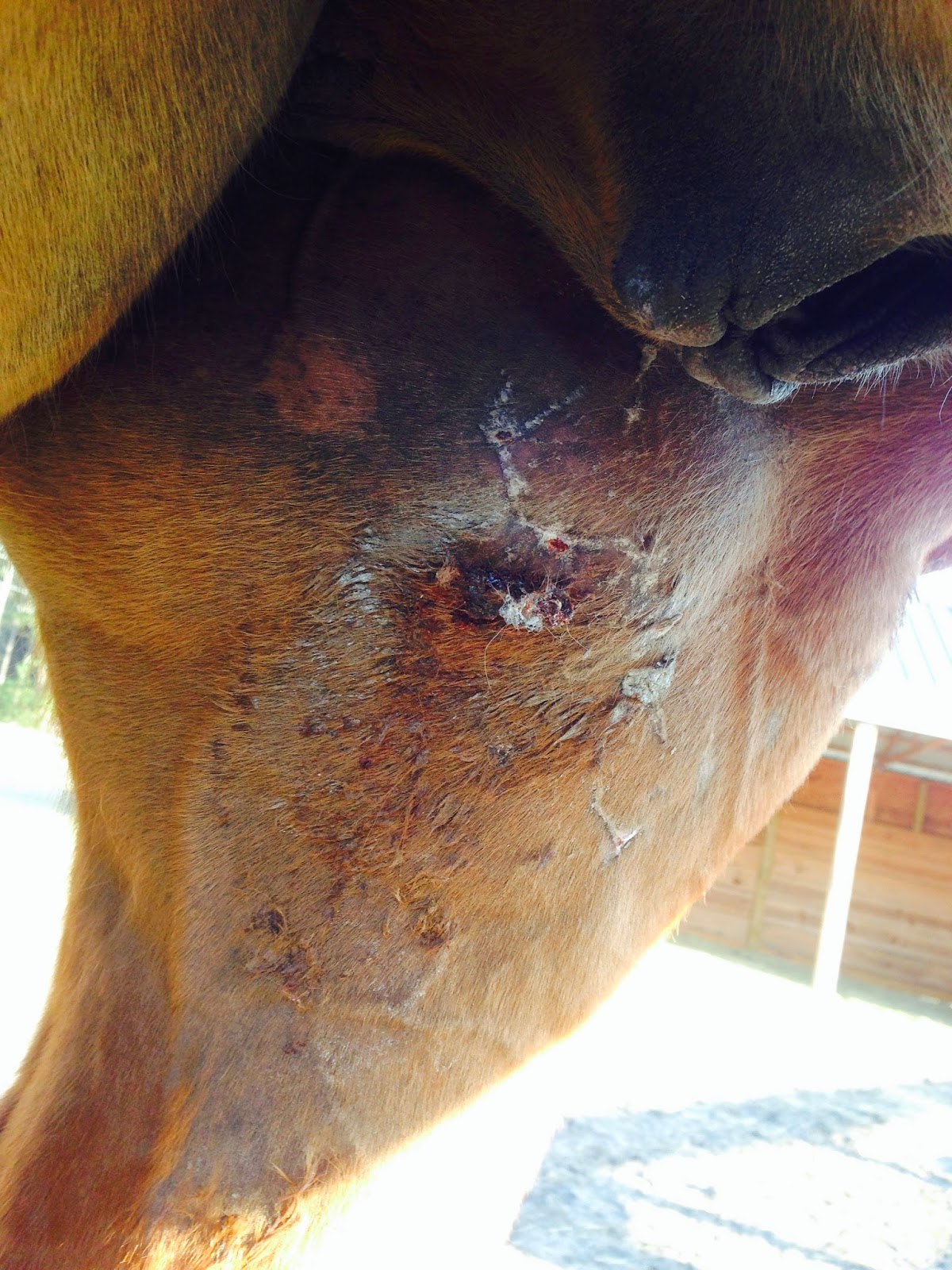 Seven weeks of rehabbing a punctured stifle and torn gaskin went by fairly smoothly. He was on copious antibiotics and daily cleansing of the wound. Of course he refused to be confined so his makeshift recovery stall was knocked to the ground by day 2. 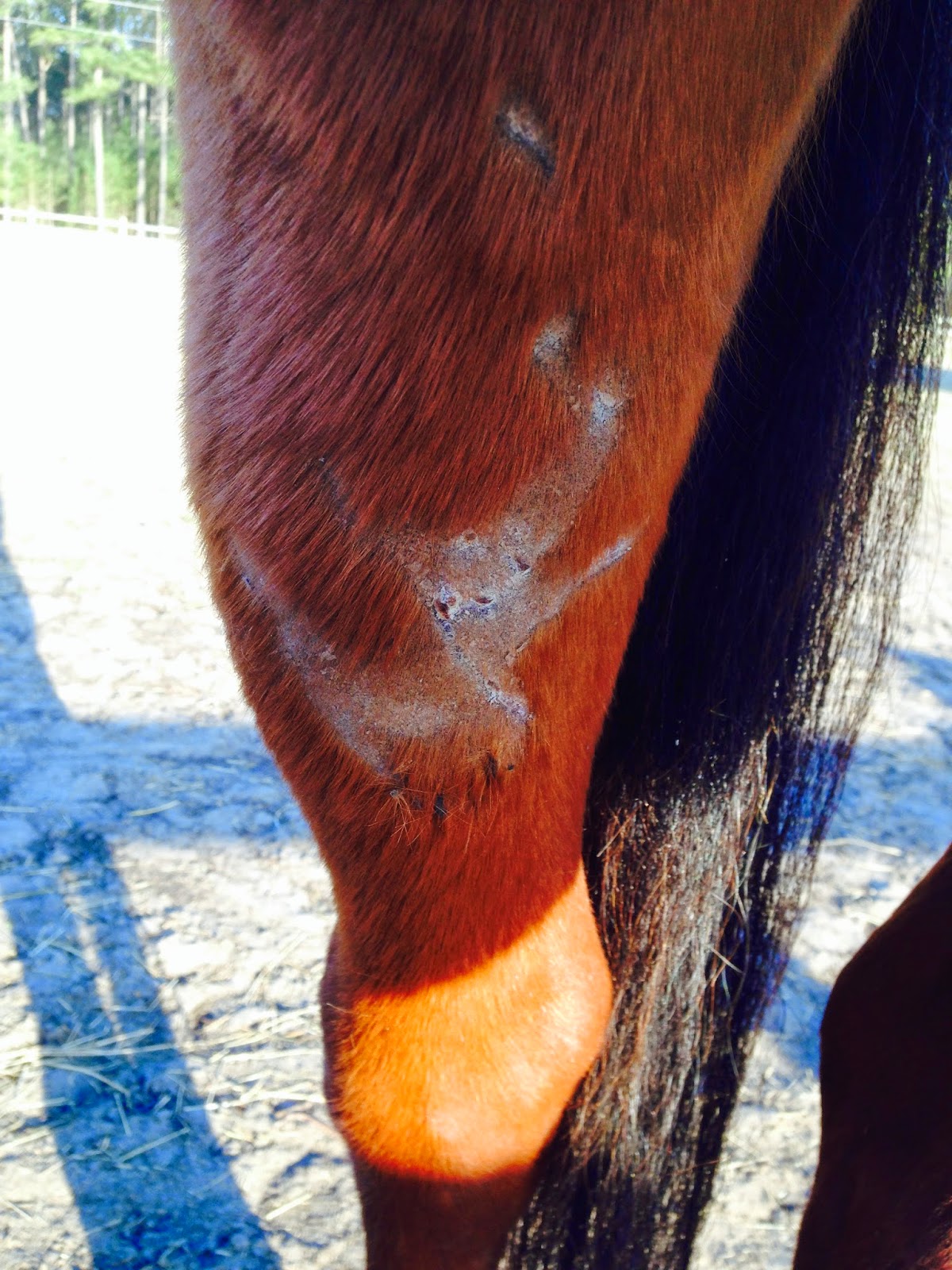 Anyway, he went back to work (and when I say “work” I mean he was walk-trot-canter for a grand total of 15 minutes) at the end of April and things seemed to be going fine.
Then I went to Rolex . . .
I knew when my darling husband picked me up at the airport that something was askew. I waited until we were in the car to ask about the horses and he said “well, there was an . . . incident . . . “ 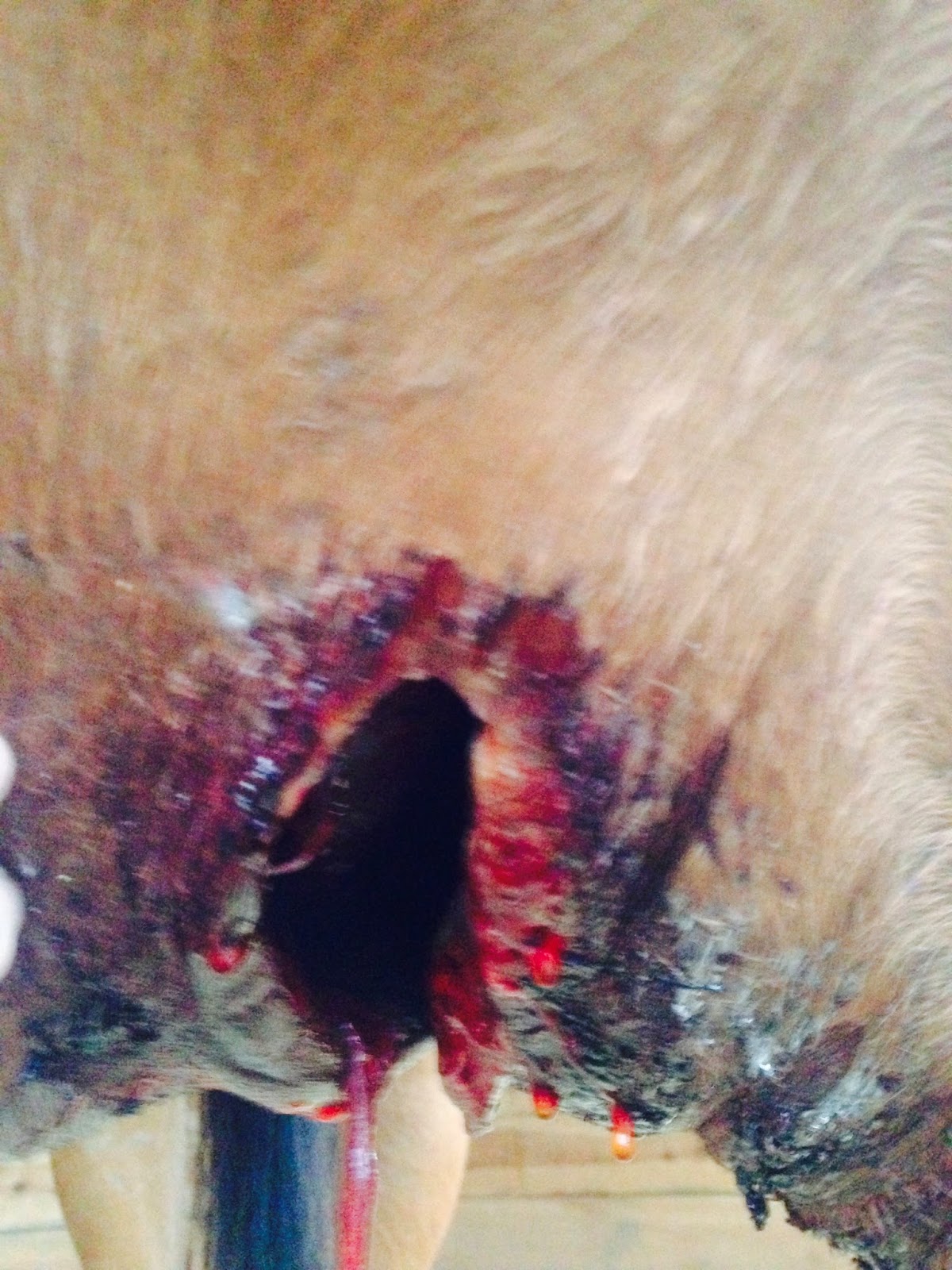 Apparently.
We’ll never know exactly what happened, but we do know that Cotton was in his paddock at 10 pm and standing outside of it at 6 am. My only guess is that something ran through (we have boatloads of deer) and spooked him. He probably took off and didn’t even see the fence. It would seem that he actually ran straight into an upright and split his chest cavity wide open. The upright was bent over almost to the ground.
The wound was so deep that my vet could put his entire arm up to the bicep inside of it. My family made a group decision not to call me because they knew it would change absolutely nothing and they wanted me to enjoy my yearly outing. I know it was tough for them and I applaud their strength.
Anyway, Cotton’s wound was impressive to say the least. I left for Rolex on Thursday morning and this happened sometime Thursday night. That guy, what was he thinking??
He’s such an amazing horse, and even though he has minimal time under saddle since leaving the track, something about him has me absolutely wrapped. So we spent the next 4 weeks doing daily irrigations of the wound, IM and PO antibiotics, and weekly visits from the vet with sedation and deep debridements. I would tell him “Cotton, you’re lucky you’re here; I think you would be fertilizer anywhere else” and he would just give me his puppy dog eyes that said “stay with me, mom, this is all going to get better”.
Yet again he protested being enclosed and proceeded to body slam the fence until it was down, at which point he stood calmly inside the pen. Sometime around week 3 he puffed up like a blowfish with subcutaneous emphysema. His entire body from tail to cheekbones was inflated with crepitus. It was horrible and I though we would lose him, but every day he would give me a look said he was ready to keep fighting.
So we did. 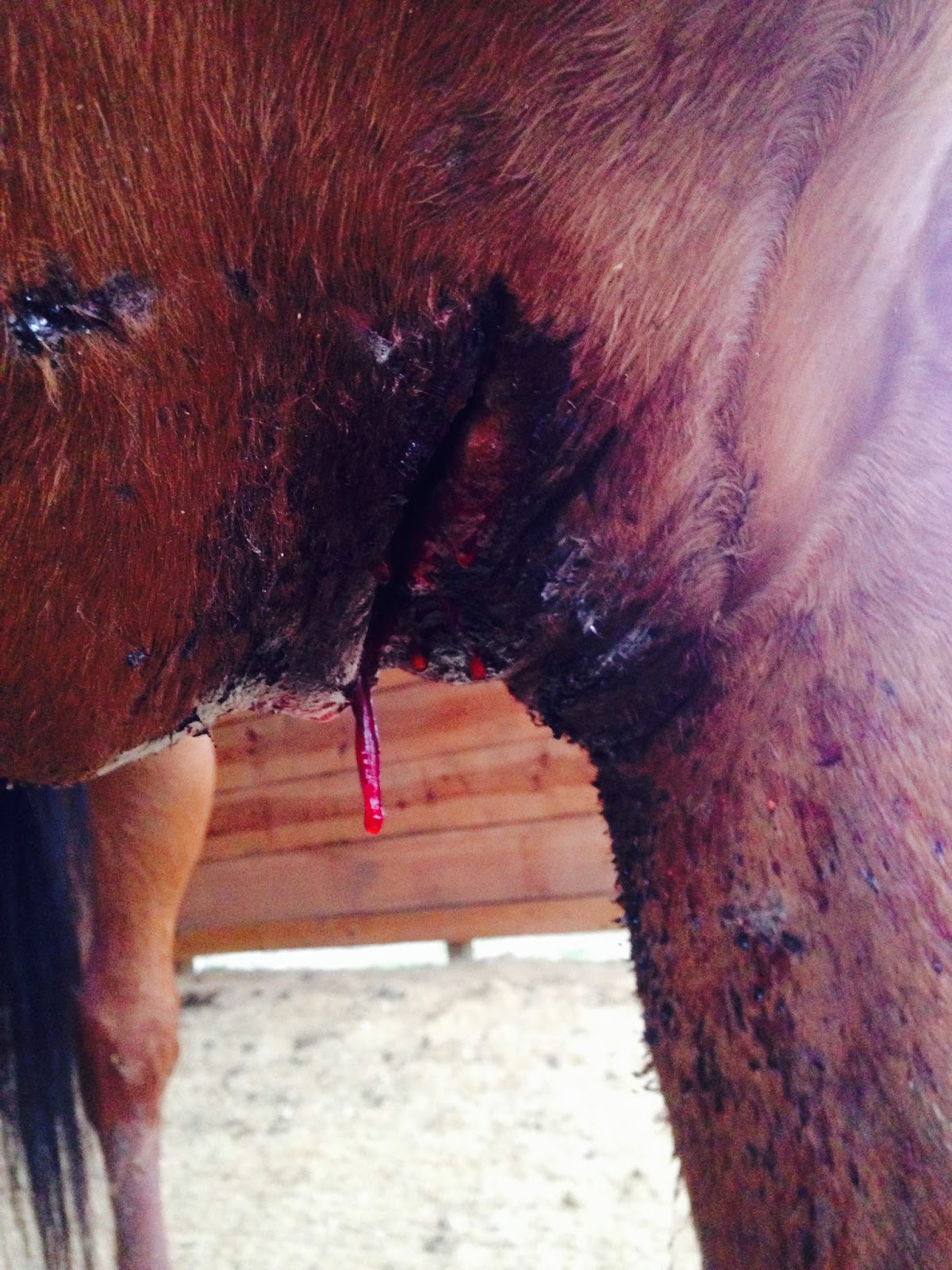 This was day 5. Trust me, the photos do NOT do the wound justice.
This is what he thought of his enclosure. He must have thrown his entire body against it until it submitted. 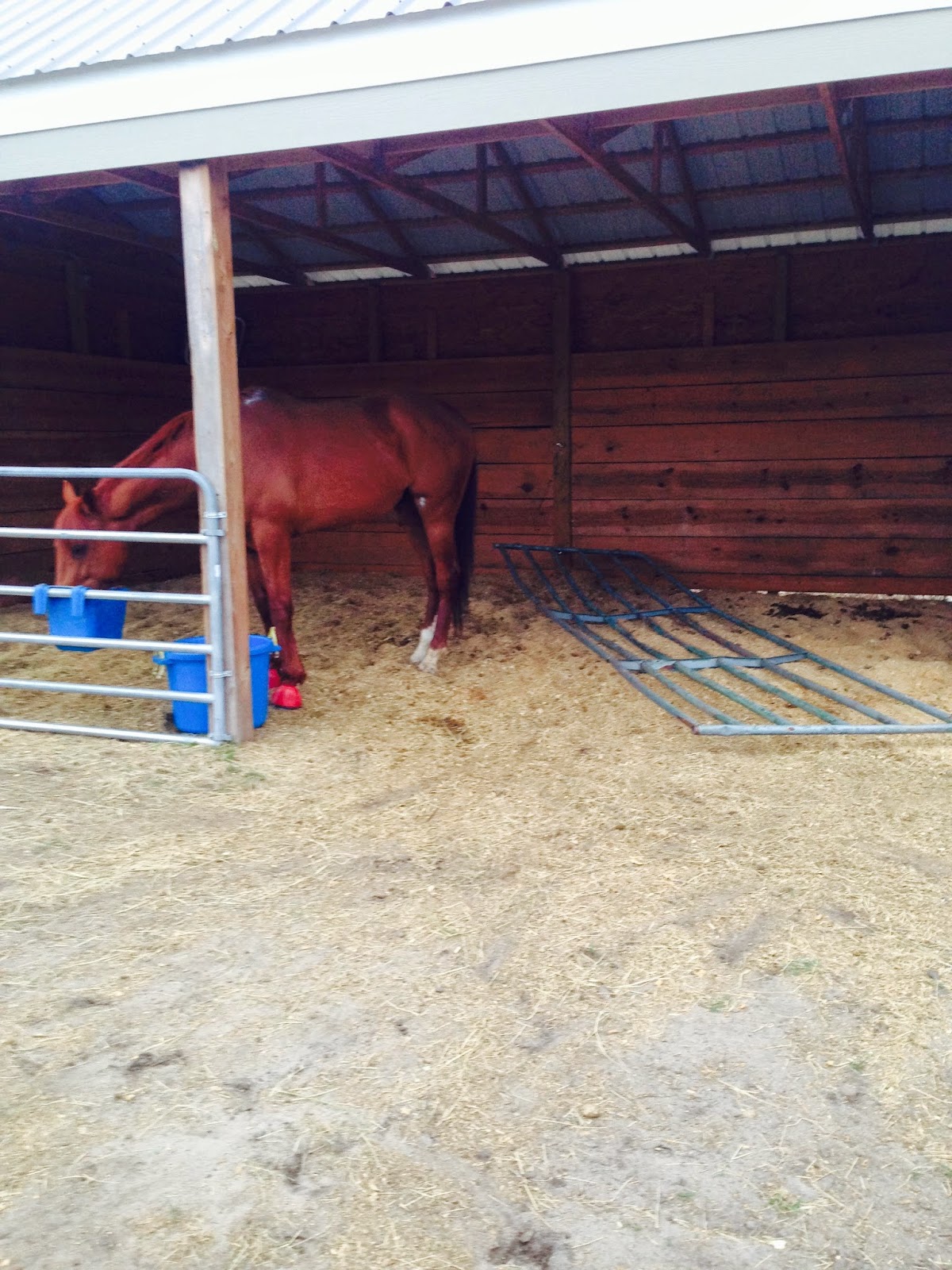 This is what I would scrub off his leg almost every day. 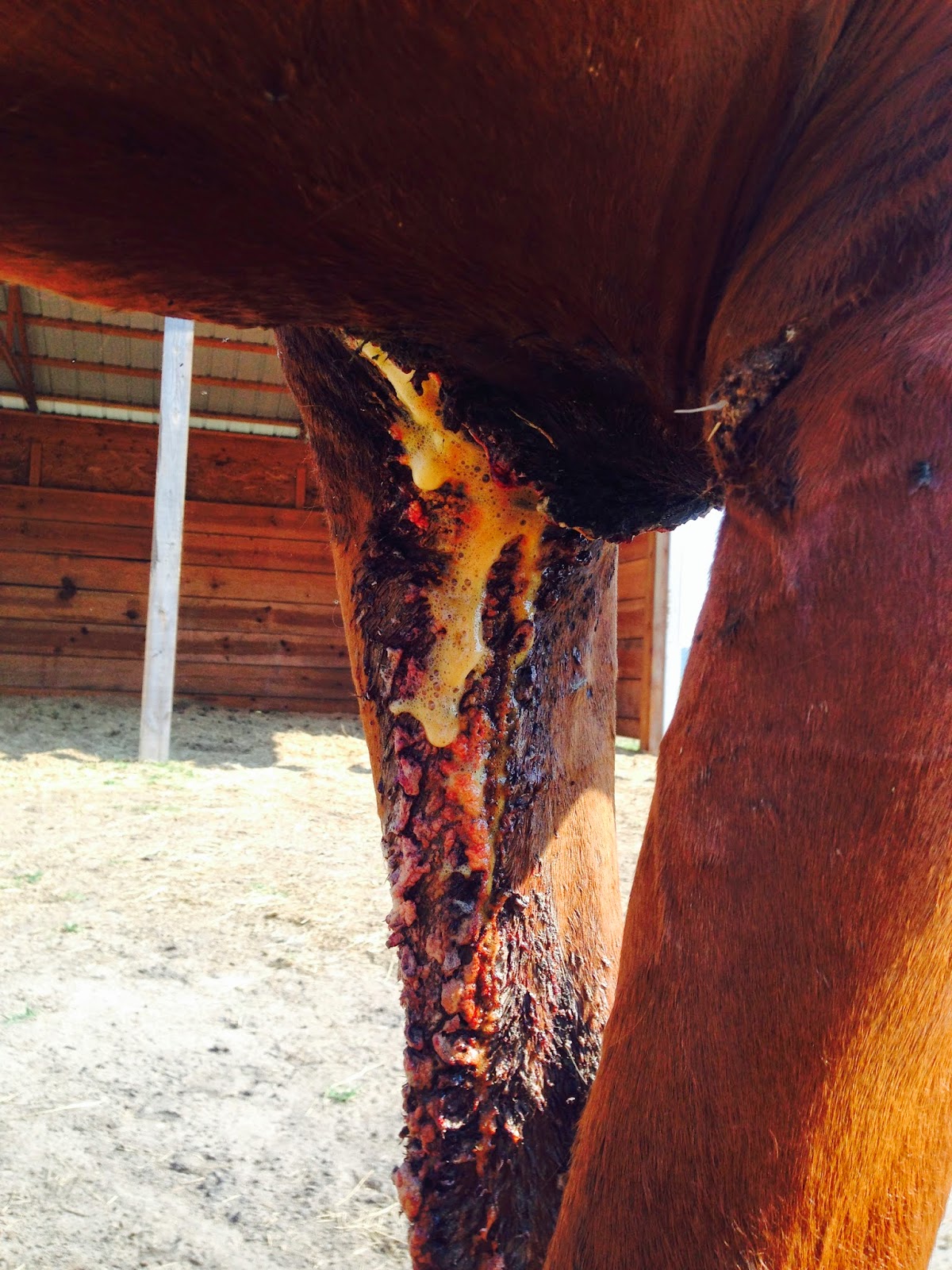 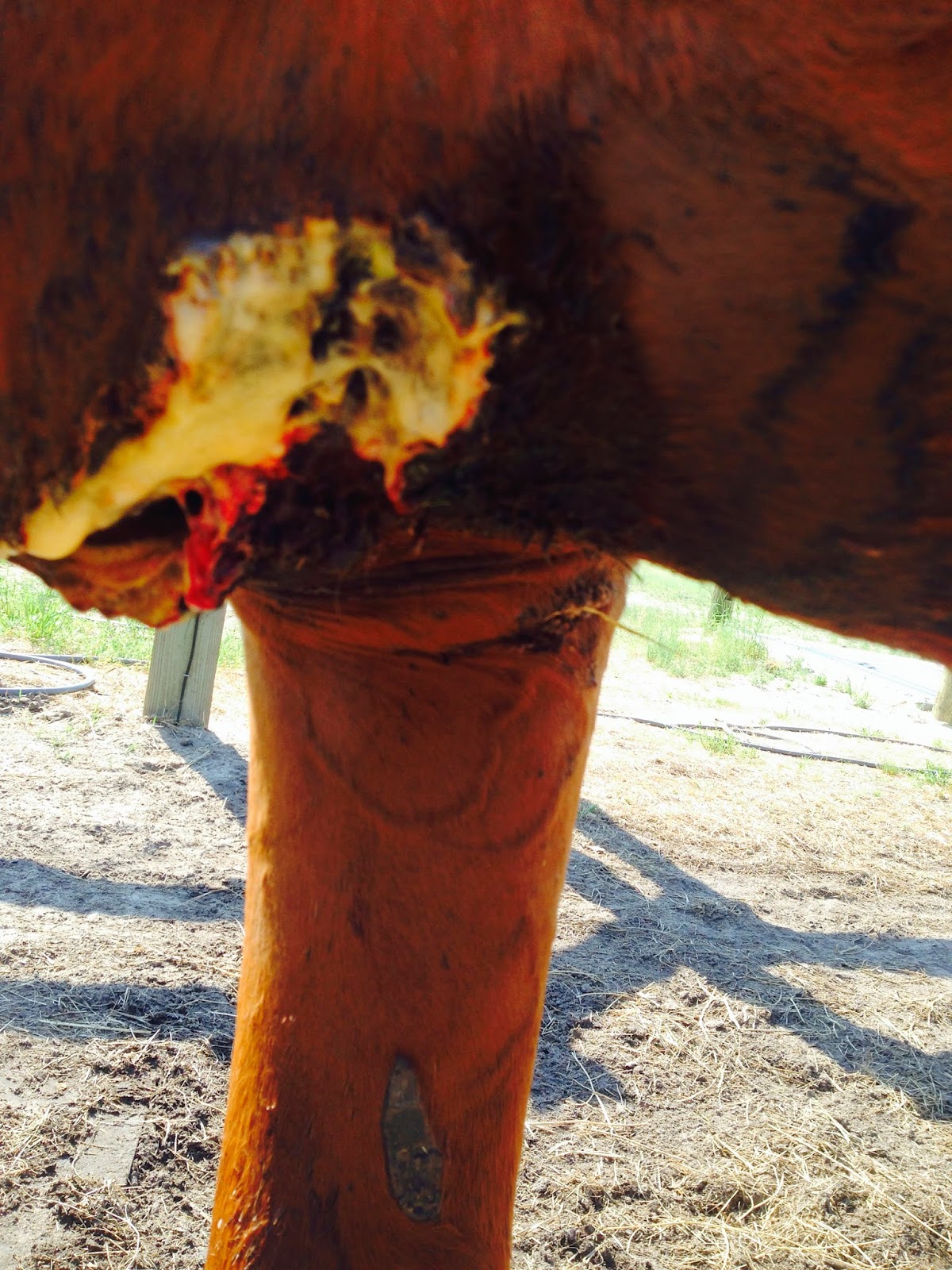 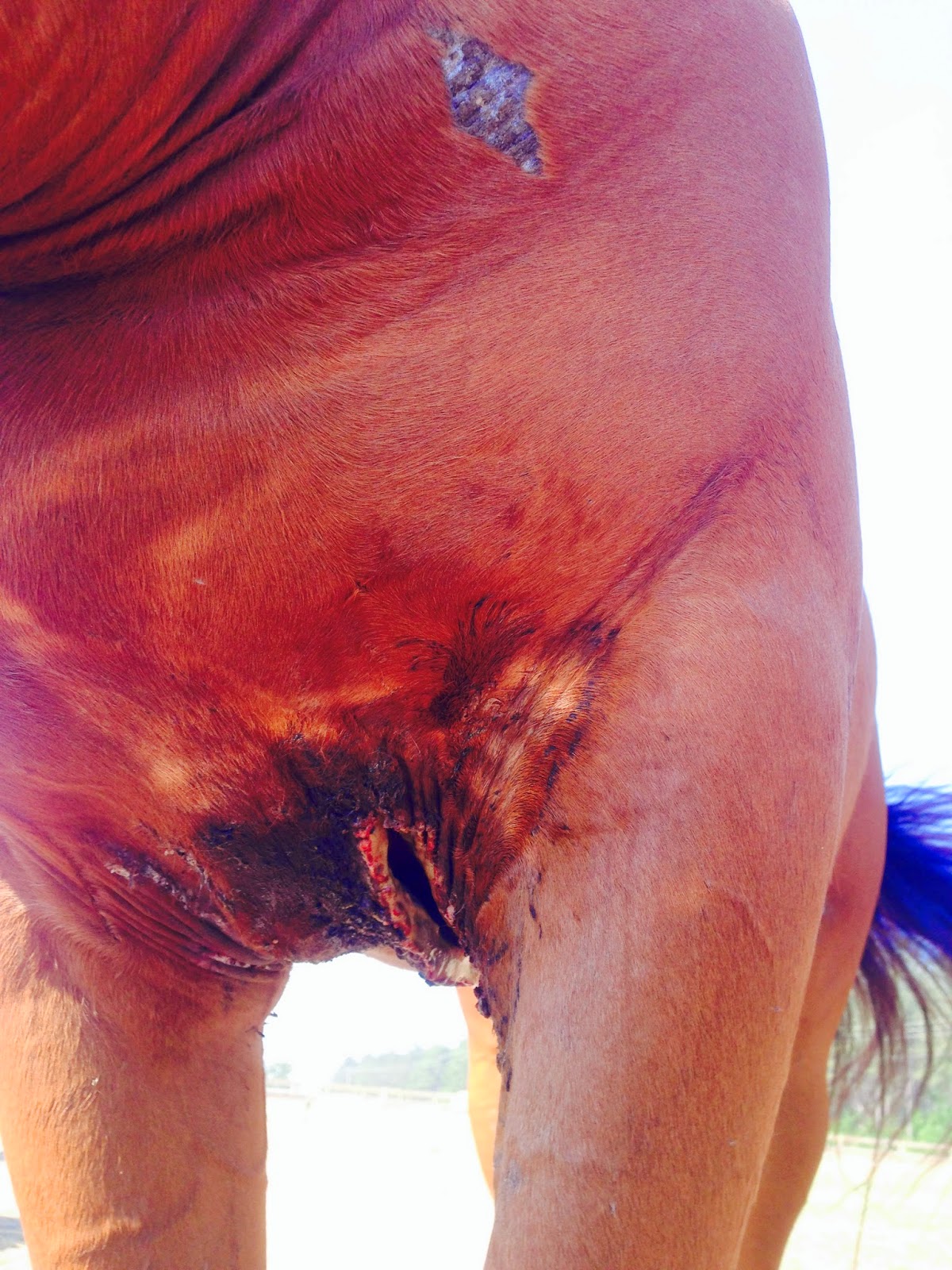 This is week 3. You can see how puffed up he is looking. The swelling doubled after this was taken. If he weren’t so sick the chipmunk cheeks would have been adorable.
My vet said he hasn’t seen another horse with such a will to live. I don’t know that he ever will.
I can’t explain what happened or why. We have a nice, quiet, horse friendly farm. He is turned out 24/7 with his best buddy. He eats 3 square meals a day and all the hay he wants. Hell, this is horse nirvana.
It’s been exactly 2 months. At week 6 when he was showing signs of boredom and restlessness  I started doing ground work with him. For the last 3 weeks he has walked all over this farm. He has renewed his lunge line etiquette and reinstalled his ground manners.
Thursday I got on him: 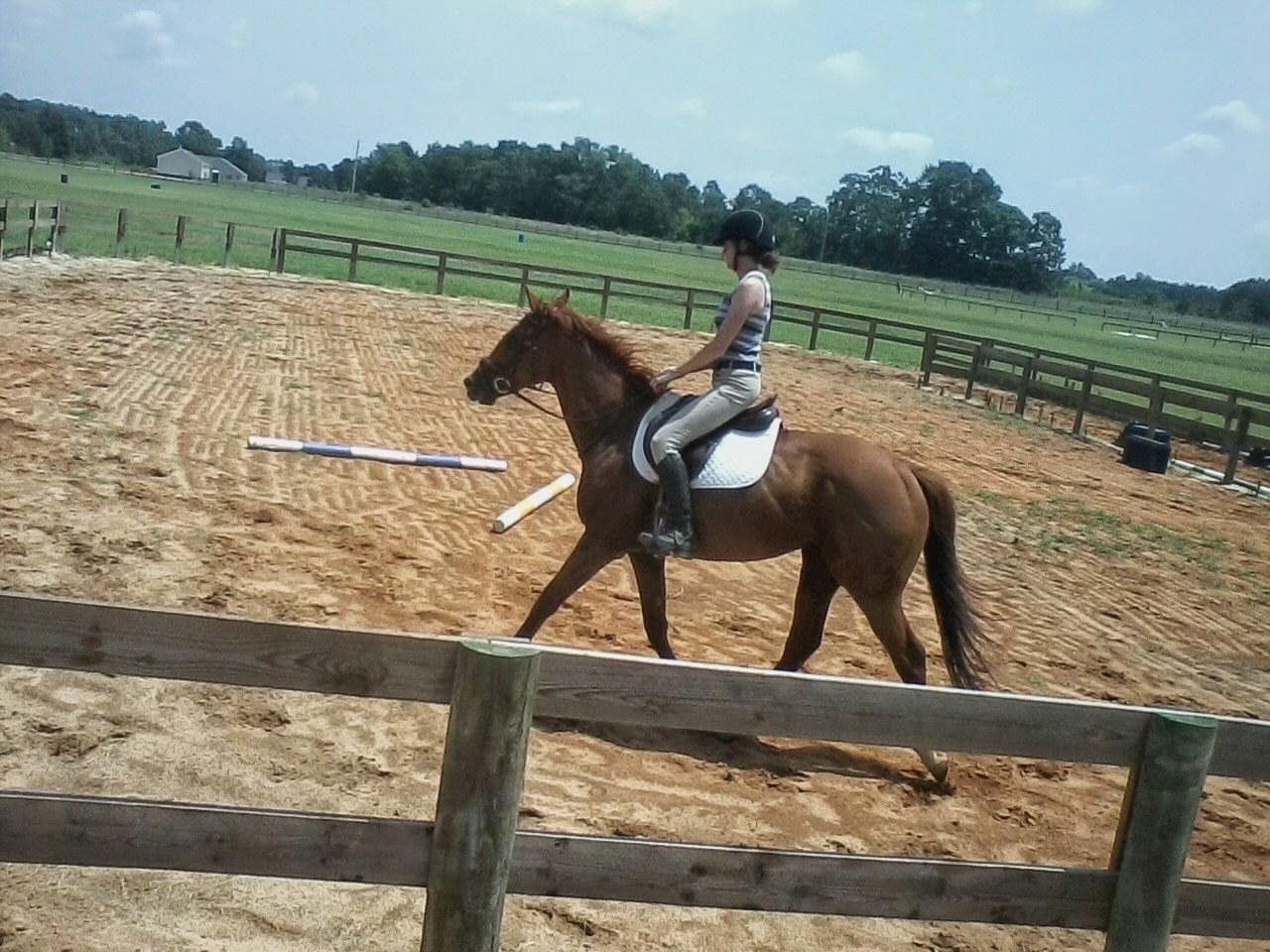 Friday he came out like a horse on a mission. He walk-trot-cantered with a contented sigh:
Today he went for a hack around the property: 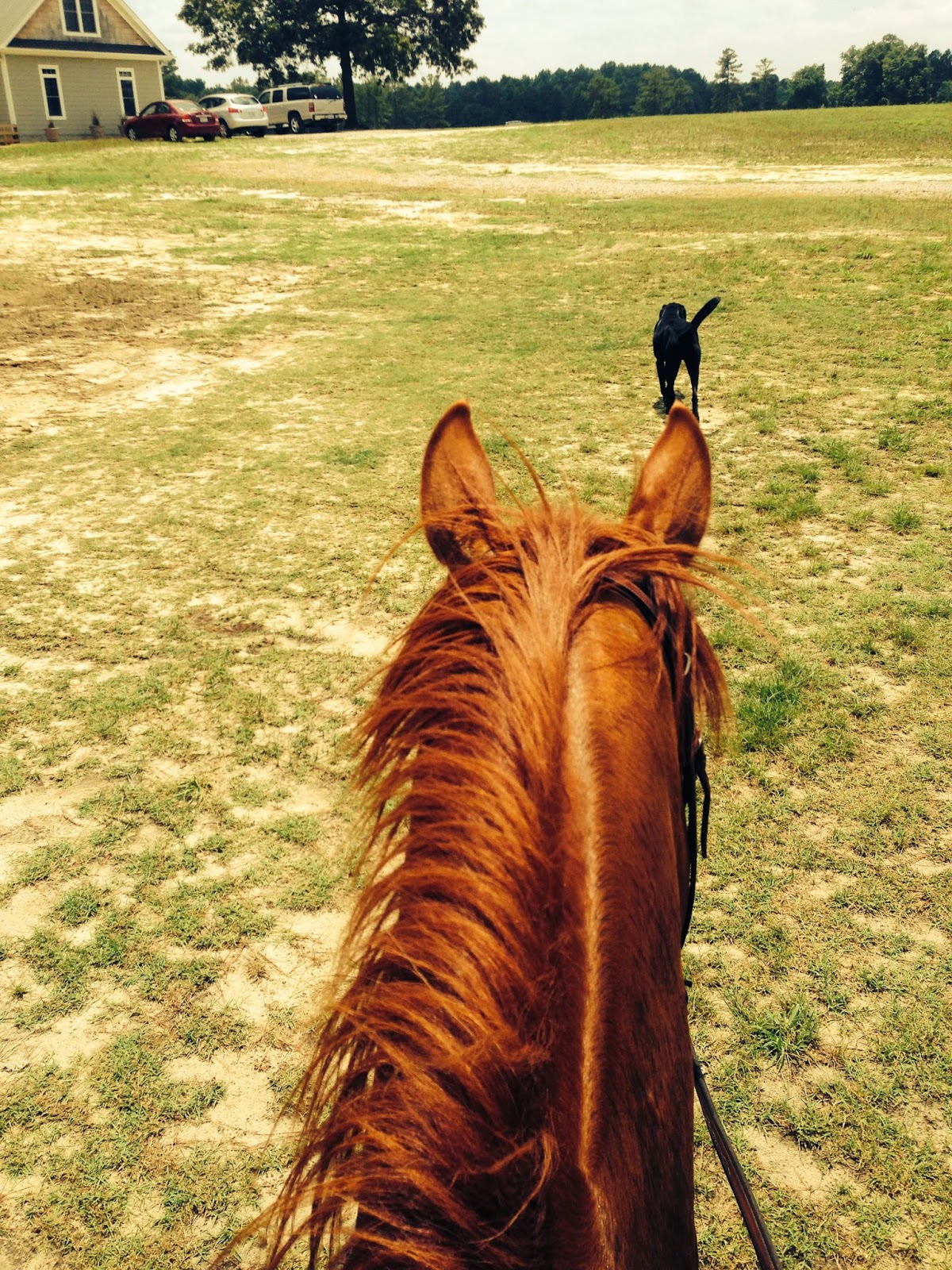 This is a horse that has a total of probably 15 hours under saddle since coming off the track, and he is the most sane, confident, well mannered horse I have EVER sat on. Best of all, he wants a job. He sees me coming and pushes his roommate out of the way.
I don’t know what his future is, but I know that he has defied every odd, every barrier, every challenge, and come out stronger and sounder than any horse should. I love this guy and I’m pretty sure he thinks I’m okay too.
Can’t wait for tomorrow . . .

3 comments on “Cotton’s comeback – the rest of the story”